In 1980, Rev. Paul E. Eichhoff was asked to start a new parish in Broken Arrow. Father Eichhoff named the new parish after St. Benedict of Nursia (480-543), the “Father of Western Monasticism,” for several reasons. The year 1980 marked the 1500th anniversary of the birth of St. Benedict; it was the Benedictine monks who first brought Catholicism to Oklahoma in the 19th century; and there was no other parish in the Diocese of Tulsa with that name. 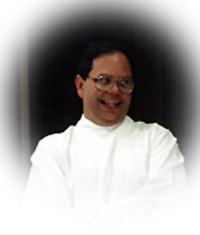 Within six months, the parish size quadrupled to 260 families, and Father Eichhoff estimated that at least one hundred additional families would join the parish within the next year. At that rate, it was difficult to plan for the size of the church building, but the parish building and finance committee took on the task.

In a February 1981 interview with the Broken Arrow Ledger, Father Eichhoff described his parishioners as “young, mainly couples who transferred from out of state with many young children, and largely made up of couples in which both husband and wife are Catholic, a characteristic rare in Oklahoma.” He described his parishioners as bringing a “high level of enthusiasm to the parish” which translated into a great deal of activity.

Within the first few months, both a Men’s Club and a Women’s Club were organized, 25 teachers were involved in religious education programs for pre-school through high school, and a choir was formed.

In September 1983, about 180 parishioners turned out to lay sod around the new church building, and on October 8 the church was dedicated by Bishop Beltran. One unique feature of the new church building was the large, 4,570 square foot “commons” area that served as a transitional area to the church, classrooms and other spaces within the parish building complex, a “cry room” and, with folding chairs, an overflow extension of the sanctuary. Until McGuire Hall was completed in 2002, it also served as a social gathering place. The “Ora et Labora” stained glass window was a gift of the Sisters of the Sorrowful Mother. 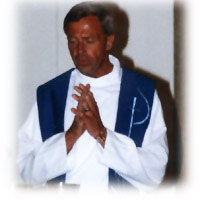 On May 30, 1987, parishioner John Donnelly was ordained to the permanent deaconate at the Church of St. Benedict. In 1988, Father Eichhoff was transferred and Father Tom Hildebrand became pastor that summer.

Under Father Tom’s leadership, the parish matured and the number of parish families increased significantly. The parish debt was retired in large measure due to the generosity of Mrs. Charles (Mae) McGuire, who left the parish a substantial bequest in her will.

On May 11, 1990, another parishioner, Lee Ellis, was ordained to the permanent deaconate. Deacon Ellis served the parish faithfully and energetically until his untimely death on June 11, 2001. Father Eric Edwards became St. Benedict’s first associate pastor in 1993.

The interior of the church also took on a different look. A tabernacle was added and a large crucifix was installed. The Blessed Mother and St. Benedict were honored by statues. Additional pews were added, bringing the seating capacity to approximately 800. 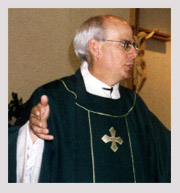 In 2002, McGuire Hall was constructed and dedicated. Cry rooms and a choir room were added in space formerly occupied by parish offices, and new offices were built between the commons and McGuire Hall. 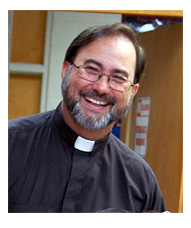 In June of 2007, Father Joe Townsend became our pastor and under his leadership and through the generosity of the parishioners, our parish debt incurred from the building of McGuire Hall was paid off 8 years early. Also under the leadership of our parish/finance councils, along with our pastor, the worship space of Saint Benedict underwent a complete renovation. This renovation was guided by the principal of the Second Vatican Council document on “Sacred Space”; the principle of “noble simplicity”. One of the major elements of the renovations was the desire to draw all who enter our worship space into an awareness of the “sacred”. This goal has been beautifully achieved through the use of the colors in the original stain glass window in the south wall, the use of sacred images of the Blessed Mother and Saint Joseph and the raising of the altar of sacrifice, to be the center of our worship space, the placement of the tabernacle and crucifix in center position, and the new marble baptismal font placed prominently at the entrance of the Church, to better symbolize that it is through the Sacrament of Baptism that one enters into the life of the Church and the life of Christ. This renovation, again because of the stewardship of the parish, brought no new debt to the parish. The parish has also seen a growth in Vocations to religious life. Deacon Rick Stookey was ordained in 2010 to the permanent deaconate and Gary Beam and Danny Brennan are presently studying for the deaconate. The parish is also blessed to have a total of 5 men studying to be priests for the Diocese of Tulsa, a record number for any parish in the state. They are Sean O’Brien, David Webb, Robert Duck, Mason Werth, and Joshua Votruba.

The parish, as a witness of its own stewardship, has increased its commitment to the needy by beginning the ministry known as “Mission of Hope” that assists people in our community who struggle financially.

The parish has also increased all its outreach programs by a minimum of 10% and at the special request of Father Joe, our Finance Council began 3 years ago the “Saint Joseph Fund” which was created to specially assist active Saint Benedict parishioners who have lost their job. This fund has given thousands of dollars to parishioners in times of employment.

The parish grew by over 35% to nearly 1,800 families within a 5-year span, which facilitated the addition of another weekend Mass on Sunday evening. The growth also brought about serious discussion among the leadership councils and pastor to investigate the need for a new religious education building, including an expansion of the present parish hall with space which could also be used as a “gym” for youth and other activities.

The next great project we discussed included the building of an external chapel that would be open for twenty-four hours a day, seven days a week.

On July 9, 2018, Father Joe Townsend led his last Mass before going on sabbatical to Fairbanks, Alaska.

During the same month, Fr. Bryan Brooks, Vicar of Priests of the Diocese, became our new pastor who led the continuation of the chapel into the following months. Because of the booming economy and the changes in design, the materials needed to build it was lowered in cost. In May, 2019, ground broke to make preparation for the construction of the chapel. That year gave many challenges to the completion of the project. Rain and snow caused weeks of delay in its planned completion date. But weather wasn’t the only factor to cause delay.

In February, 2020, precautions for the COVID-19 virus (Wuhan flu) began to take place. Early March brought limited Mass seating and many of the ministries were forced to discontinue large meetings and events due to state mandates. On March 19, Bishop Konderla made the difficult decision to suspend the offering of all public Masses throughout the Diocese.

Fr. Bryan introduced the livestream for Mass, connecting our parishioners in a new way. The need for social media, virtual connectivity, and communication had never been greater. Many of our ministries met virtually (an implementation which is still being used currently for those who are considered high risk). Others put their schedules on hold. Throughout Lent and Easter, all physical functions at the church ceased.

Sixty days later, on May 23, Bishop Konderla determined to open public Mass once again. Though it was news of great joy, we proceeded with caution. Our seating capacity within the sanctuary could not exceed more than 33% and confessions were heard outside or in large rooms like McGuire Hall. Sanitization was used more frequently, social distancing was practiced, and the use of masks during Mass were asked from every parishioner.

Finally, after much anticipation, the Eucharistic Adoration Chapel which had been named Saint Scholastica Chapel, opened on June 11, 2020. And though we cannot yet use it to its full capacity even now, we look forward to the day when this pandemic is officially declared over; when we, the church, and even the world, can resume a sense of normalcy.