What is an ACTS Retreat? 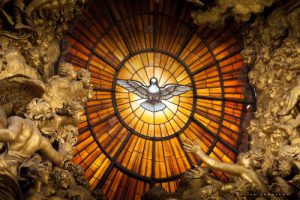 An ACTS retreat is a four-day and three-night Catholic lay retreat presented by fellow parishioners.  The retreat begins on Thursday evening and ends the following Sunday at a Mass celebrated with the parish community.  Retreats for men and retreats for women are given separately.  Led by the Holy Spirit, the retreat is presented by lay Catholics who are fellow parishioners of St. Benedict, with the support of the pastor.  The retreat facilitates the attainment of a new or deeper relationship with the Lord through:

Adoration – the call by, acceptance of, and response to God

Community – the love and caring of each other

Theology – the study of God through scripture and the Catholic Faith

Service – to God and his people

Each retreat is conducted by a retreat team of 20 to 30 individuals who have attended prior ACTS retreats.  Chosen by the Retreat Director, the team organizes the retreat and ministers to the needs of the retreatants during the retreat weekend.

What is the purpose of the ACTS retreat? 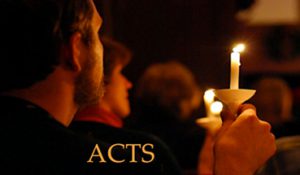 An ACTS weekend is designed to help the retreatants enter into a new or deeper relationship with our Lord and fellow parishioners.  This is accomplished through Adoration and daily prayer, the call to Community in one’s parish as a member of the Body of Christ, and Theology in encouraging the study of scripture and our Catholic Faith.  All of this will emphasize and encourage the virtue of Service to our Lord, our parish, and one another.

What is the goal of an ACTS retreat?
A parish ACTS retreat strives to achieve the directives of Vatican II and goals of the Revised Code of Canon Law of 1983 which emphasize “community and pastoral care” within a parish.  The weekend allows the retreatants to experience God’s love and joy.  They return to their parish with a deeper love for each other and a desire to become more involved in their parish faith community.

Who can attend an ACTS retreat?
The retreats are open to any church denomination.  Holy Scripture and the teachings of the Roman Catholic Church are the guides for the retreats.  The retreat takes on the traditions and atmosphere of the parish community sponsoring it.

Inspiration for ACTS originated in the Archdiocese of San Antonio in 1987, modeled after the popular Cursillo movement. Three laymen began discussing how a retreat program should emphasize parish life, and be open to non-Catholics. They knew that many people were seeking a greater connection to Christ and his Church. So they created the ACTS retreat, which aims to provide a journey of faith awakening and renewal, presented by teams of volunteers.

Those first meetings 30 years ago in San Antonio produced the structure of the retreat weekend as we know it now. The pattern follows the biblical description of the early disciples: breaking bread and worshipping together, sharing, receiving instruction, and reaching out in loving service. The pillars of ACTS are spelled out in its acronym – Adoration, Community, Theology and Service – all to bring participants closer to God.

ACTS began spreading from parish to parish in the San Antonio Archdiocese after the first retreat in 1987.  Enthusiasm for the retreats made its way throughout Texas and beyond by word-of-mouth testimonials and the power of the Holy Spirit. Parishes where ACTS is established often receive the invitation and the privilege to bring retreatants to new territory, which is called a mission. ACTS expanded into Oklahoma thanks to Texans who presented mission retreat for St. Bernard’s Church in Tulsa in 2011.

The ACTS story at St. Benedict’s began in 2014 when Irene Pollard returned home to the Tulsa area from San Antonio, where she was very active in ACTS. Kathy Sands from St. Bernard’s, knew of Irene’s return and Jennifer Karbowski’s desire to bring ACTS to St. Benedict’s. Together they came up with a plan which eventually included several parishioners from St. Benedict’s who had already made their ACTS retreats at St. Bernard’s. Early planning meetings included Jennifer Karbowski, Becky Mickelson, April Slezak, and Deacon Dick Berberet – all of whom went through ACTS at St. Bernard’s in previous years.  These organizers met with their pastor, Rev. Joe Townsend, in early 2015 about getting ACTS going in Broken Arrow.  Father Joe agreed to look into the missioning process, and the first retreat dates were booked at Camp Christian near Chouteau, Oklahoma.

The first St. Benedict’s mission teams were made up mostly of ACTS brothers and sisters from four Tulsa area parishes: St. Bernard’s, Christ the King, St. Mary’s ad St. Joseph’s in Bristow. Father Joe was among the 20 men who attended the first mission in October 2016, while 24 women followed at their retreat weekend in November 2016. The second men’s mission drew 19 candidates in March 2017, while the second women’s mission maxed out at 30 in April 2017. Many of those from St. Benedict’s who attended the initial retreats stepped up to serve on the teams for the second round.  Mentors from St. Bernard’s took the lead in sharing their ACTS knowledge and supplies to equip St. Benedict’s to independently present the retreats going forward.

Our first solo retreat was in fall of 2017 and have now held 5 retreats for both men and women though ACTS at St. Benedict. We pray that through the intercession of the Holy Spirit we continue this evangelization throughout the parish.

ACTS continues to grow nationally and even outside the United States, reaching parishes in at least 28 U.S. states, 9 countries, and 3 continents.  Thousands of people attend these retreats each year. With humble and grateful hearts, we are passing on what we received.

Each parish ACTS community has a CORE Team made up of ACTS brothers and sisters that serve by organizing support for the ACTS retreats, small faith communities, and facilitate other ACTS community-related events throughout the year. Core members make a commitment to serve for 3 years in this role and participate in monthly CORE meetings.

Below is the list of the St. Benedict ACTS CORE Members. If you have any ideas, questions, or suggestions regarding ACTS at St. Benedict, please reach out to Dennis MacDonnell at dmacdonn@aol.com.